Ireland&UK Series-Part 3: Galway (The G Hotel), Connemara, and the Cliffs of Moher

After leaving Dublin, Alex and I hopped in our Micra and headed across Ireland to our next stop, Galway. We drove straight to our hotel, The G Hotel. The G Hotel is a 5 star hotel and you can get a very reasonable rate through Travel Pony. The Travel Pony rate includes a full Irish breakfast! Click here to sign up for a Travel Pony account. When you sign up, you will get $35 in travel credit towards your next booking! The G Hotel was one of the most beautiful hotels I have ever stayed in and the location on the water cannot be beat. The decorations are modern and glamorous, the rooms were spacious and comfortable, the service was impeccable, and the food was delicious. There is also a full spa if you have time to take advantage of the services. The walk to town was only about 15 minutes but you could easily take a taxi if you did not want to walk. 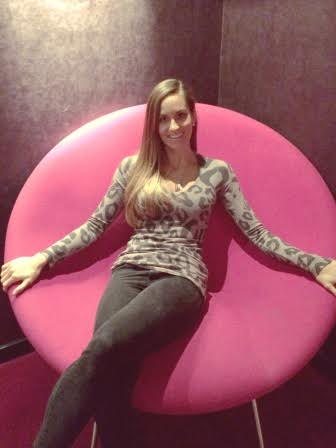 If you prefer to stay somewhere smaller that is closer to town, we walked by the St. Martins B&B. I have no personal experience with St. Martins, but it was in a great location right on the canal and had an adorable garden!

We arrived in Galway just in time for lunch. Taking a recommendation from our Frommer’s Easy Guide to Ireland, we decided to eat at the Michelin award-winning Ard Bia. It was Alex’s and my first experience at a restaurant with Michelin stars. The menu looked fantastic so it was hard to choose, but we settled on sharing mussels and the sausage and bacon yolo sanvo (a sausage and bacon sandwich). Both were fantastic with high quality local ingredients. After our meal, we purchased a chocolate hazelnut brownie and bread and butter pudding to share while we sat by the River Corrib.

Galway is quite small in size so the main sights can be seen fairly quickly. Ard Bia is located next to the Spanish Arch so we started there. Next, we attempted to visit the Galway City Museum, but it was unfortunately closed on Mondays. I have read great reviews about the museum, however, so I would recommend going if you can. It is supposed to be a great way to learn about Galway before walking around it. We next visited the St. Nicholas Church, the largest medieval parish church that is still in continuous use, having been founded in 1320. For a small fee, you can purchase an informative brochure that provides information on various details inside the church, including some ancient tombs. Alex and I were hoping to see a concert at St. Nicholas Church, but unfortunately the summer series had not started yet. We walked on to the Galway Cathedral, a much bigger cathedral that was founded in 1965 and is the newest stone cathedral in Europe. Our final destination was Eyre Square, where we sat and people watched while planning our afternoon.

You could easily spend more time than we did in Galway if you wanted to. You could visit museums, shop, and eat and drink at the many restaurants and pubs. We opted to use the afternoon to drive to Connemara National Park to see the Kylemore Abbey. The drive is a little over an hour away. We drove straight to Kylemore Abbey because we knew it would be closing soon after we arrived and we wanted to make sure we were able to view the Abbey. It is absolutely breathtaking and has quite an interesting history. Originally built by a man named Mitchell Henry and his wife in 1867, the Abbey has changed ownership throughout the years, even functioning as a boarding school until 2010. Currently, the Abbey is run by Benedictine nuns and is open to the public for visits.

After leaving Kylemore Abbey, we drove into Connemara National Park for a short hike on one of the few trails. The landscape in Connemara is incredibly beautiful and has been described by Oscar Wilde as “a savage beauty.” The region, full of lakes, rugged mountains, beautiful views, and windswept bogs, feels untouched and mysterious.

After leaving Connemara, we drove back toward Galway for dinner in Barna at O’Gradys on the Pier. We had seen the restaurant on a show called Irish Food Trails and thought it looked like a wonderful place to get fresh seafood while looking out on views of the Galway Bay. We had high expectations, but I have to say we were blown away! Our entire meal was absolutely perfect. We ordered a bottle of wine and were brought fresh-baked bread and fresh butter along with small servings of red pepper soup. I ordered silver hake with kumquat, mango, and pomegranate with a side of couscous. For dessert, we shared a coffee creme brulee with gingerbread ice cream and chocolate hazelnut cookie. Creme brulee is my favorite dessert, but this twist took it to another level. I recently saw that O’Gradys won the best seafood experience in Ireland for 2014 and was not at all surprised! I would say it is easily one of the best meals I have ever experienced and without a doubt, the best meal of the trip! And as an added bonus, it is good enough for Bono!

If you have a full day, another side trip option is to visit the Aran Islands. The largest island, Inis Mór, is one of the most popular tourist destinations in Ireland and is known for its many historical monuments of Christian, pre-Christian and Celtic mythological heritage. Unfortunately, there was just not enough time to do everything!

In the morning, we set off for the Cliffs of Moher, which are a little over an hour from Galway on a beautiful drive along the coast. The cliffs are around 700 feet at their highest point and run for 5 miles along the Atlantic coast of County Clare in the west of Ireland. We were blessed with a beautiful sunny day and could see the Aran Islands and Galway Bay,  the Twelve Pins and Maum Turk mountains in Connemara, and the Dingle Peninsula and Blasket Islands in Kerry. There are a few trails along the cliffs where we hiked for a couple of hours. Other attractions at the Cliffs include a visitor center with a museum (that was closed for renovations) and O’Brien’s Tower which functions as a viewing point (also closed for renovations). Rather than try to describe the stunning beauty of the cliffs, I’ll just show you pictures. Although they can’t do the reality justice, they can give you an idea! I have over 100 pictures from the Cliffs, so I will try to limit them to just a handful! 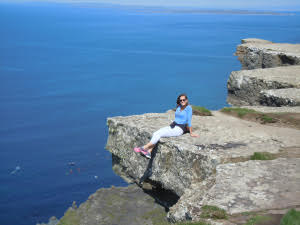 Finally, some tips regarding the Cliffs of Moher:

I will be back soon to tell you all about Dingle and the beautiful Dingle Peninsula!

Excursions (reach any of these on your own or through agencies in Eyre Square):
Aran Islands
Connemara/Kylemore Abbey
Cliffs of Moher, Liscannor, Co. Clare