Windsor, Ontario: Hopping the border for an afternoon in Canada

When I mentioned to people that Alex and I might be hopping across the border to Canada, I generally got a response that Windsor, Ontario was not worth the trip. But I’m a person that sometimes struggles with the FOMO and when given the opportunity to go to Canada during a few extra hours before our flight home, I felt I needed to take advantage of it even if Windsor ended up being underwhelming. My low expectations may have been to my advantage, however, because we found plenty to do with an afternoon in Windsor. I even think we could have spent an entire day there full of activities. Dare I say that we found Windsor to be totally enjoyable? I do.

First things first, crossing the border. When coming from Detroit, there are two options: the Detroit-Windsor tunnel or the Ambassador Bridge (check the wait time at the links provided). We took the tunnel to Canada and the bridge back to the U.S. They were both easy enough options, but I would recommend the tunnel. Since semi-trucks cannot fit in the tunnel, it was a much quicker experience for us. The bridge had nice views of Detroit and Windsor, but we generally couldn’t see much past the semi-trucks.

Once we arrived in Canada, our first stop was the Tourism Windsor Essex Pelee Main Office, located on Riverside Drive. The employees were super helpful and immediately came to our assistance with maps and information. As soon as I told them we only had about 2 hours to explore Windsor, they picked out brochures for a brewery and the riverfront park. Both ended up being fantastic recommendations! 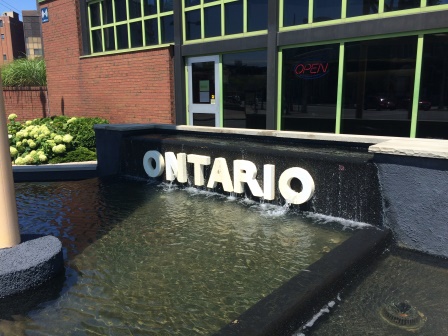 We drove to the Riverfront Trail along the Detroit River. The parks were in full bloom and the weather was beautiful. The trail runs from the foot of the Ambassador Bridge down the river for a total distance of 8 kilometers. We saw several bikers, rollerbladers, joggers, and walkers along the trail, which runs through the Windsor Sculpture Park and the beautiful Dieppe Gardens. While walking the trail, I got such a kick out of seeing the United States Post Office while standing on Canadian soil just across the river. Definitely a fun novelty! If I lived in Detroit (or was visiting for longer), I would love to bring my running shoes across the river and go for a long run along the Riverfront Trail. 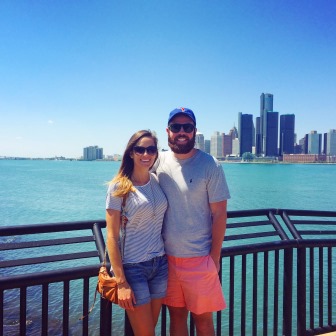 To cool off, we stopped at Walkerville Brewery Tap Room for a pint (they start serving at 11am). The brewery has great charts depicting the history of the Walkerville Brewery, the history of beer in the region, and Windsor’s very interesting role during Prohibition in the United States. The Walkerville Brewery was opened in 1890 by Hiram Walker (who also founded a distilled spirits empire that includes the well-known Canadian Club brand) and after several iterations over the years, has transformed into the current Walkerville Brewery, which operates in one of the original buildings that has been renovated, Surge Plant 16. Over 130 years later, the brewery makes its beer using the same ideology as its founder. Tours are available on Saturdays at 12:30, 3:30, and 5pm and from Monday to Friday by appointment only for groups of 15 or more. Beers available: Honest Lager, Loophole Ale, Geronimo IPA, Milk Stout, Ampelmann Dunkel. 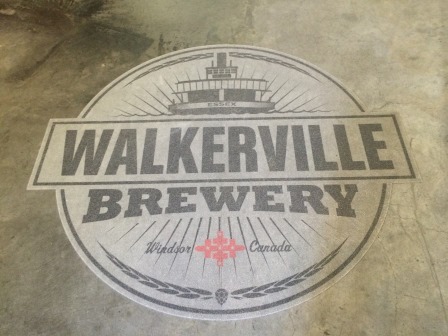 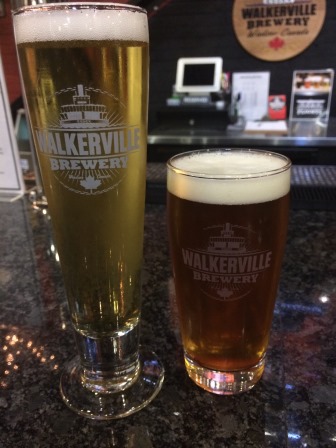 If you have more time, I also recommend a tour of the Canadian Club Brand Centre, where you can learn about how Canada helped keep American speakeasies and blind pigs full of booze during Prohibition and how Windsor was a major smuggling point for run runners. It is estimated that up to 75% of the alcohol consumed in the U.S. between 1920 and 1933 was transported between Windsor and Detroit. Such a fun fact, right? On the 1.5 hour tour, you can even visit the basement speakeasy room where meetings were held with Al Capone along with your whisky tasting.

Before we returned to the US, we picked up lunch at The Carvery, a roasted meat sandwich shop that makes delicious sandwiches with quality ingredients. The link I attached shows a video of one of the owners making the restaurant’s famous porchetta sandwich. We completely stumbled into this place, but it turned out to be excellent! What to order: Braised beef.

I’d love to hear if you’ve ever been to Canada! If so, where did you go and what did you do? I’ve been to Canada (Vancouver) one other time, but I was a toddler and cannot remember any of it. Exploring some more of Canada is definitely on my list!

Next up, I will be starting the Australia and Asia series! I really cannot wait to share all of our adventures with you all here on the blog. It was my favorite trip ever and that is saying quite a lot! Thanks for reading!