On our way to Louisville for the Kentucky Derby, we spent three nights in Nashville before and after the trip. It was easier for us to fly into Nashville and we both love the city so it didn’t take much to be convinced to spend an extra few days there. Alex and I first visited Nashville together back in 2010 for a UF v. Vanderbilt football game and we were excited to go back with some of our friends for Cinco de Mayo. Nashville is such a beautiful and lively city, full of live music, delicious food (not just barbecue), and young people. Since we were at the Derby over the weekend, we spent Thursday, Sunday and Monday there, leaving on Tuesday morning. To make it easier since it is unlikely you will have a similar schedule there, I’ll share what we did by neighborhood, rather than by day.

Shortly after arriving in Nashville, we picked up lunch at Hog Heaven, a bbq joint that has been around the area for over 25 years and is famous for its “Kickin’ Chicken” white bbq sauce. There are a few picnic tables at the restaurant, but if you can’t find one, don’t fret. The restaurant is across the street from Centennial Park, which is the perfect place to have a bbq picnic. What to order: BBQ Chicken sandwich with white sauce with your favorite sides (I recommend the baked beans!)

Centennial Park is one of Nashville’s best parks and is home to the Parthenon, a walking trail, Lake Watauga, a band shell, the Centennial Art Center, and historic monuments. Centennial Park became a park in 1895, when it was the site of the world’s fair (Tennessee Centennial Exposition) in 1897. Usually structures built for world’s fairs are torn down shortly after their purpose has been served, but the Parthenon replica was preserved, thankfully. The building is a full-scale replica of the original Parthenon as it would have originally looked. Both the interior and exterior are complete replicas. The interior also houses exhibits showing the Tennessee Centennial Exposition. The interior can be accessed for a fee of $6. 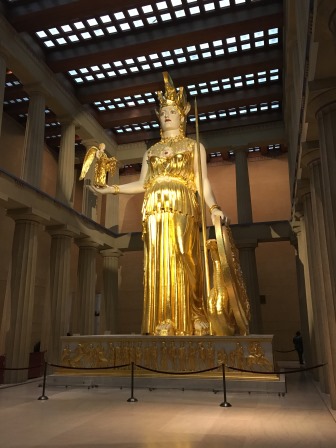 If you’re into Capitol buildings, stop by the Tennessee State Capitol. It is a beautiful building located on a hill overlooking the city and has several monuments to important historical figures. President Polk is also buried here. Visit Monday through Friday from 9-4 to see the interior. 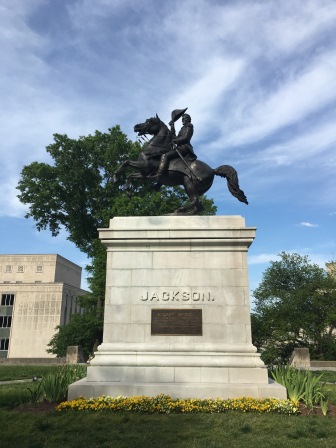 Walk down the hill from the Capitol to the 19-acre Bicentennial Capitol Mall State Park. Built to celebrate the centennial in 1996, the park includes several memorials, an amphitheater, running trails, and several stone maps that provide information about the state.

On Broadway, check out the many shops and honky-tonks. If you’re a Johnny Cash fan, the Johnny Cash Museum is highly rated. However, as someone who appreciates the man’s music, but is not a fanatic, the $18 cost of admission seemed a little steep. 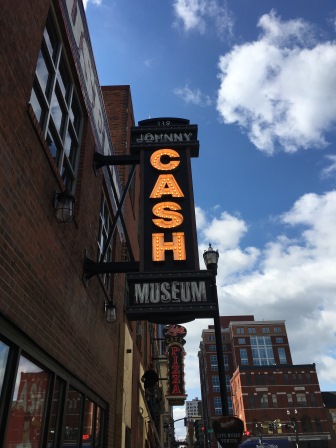 Across the street is the Goo Goo Shop and Dessert Bar, where you can learn about the history of Goo Goo Clusters and purchase merchandise and gifts to bring home. If you don’t know what a Goo Goo is, it is a delicious cookie shaped cluster of caramel, peanuts, and marshmallow, all covered in milk chocolate. If you’re feeling fancy, you can get the Supreme (with pecans instead of peanuts) or the Peanut Butter (with peanut butter instead of marshmallow and caramel). Definitely don’t leave without stopping here!

During the day or evening, make sure to stop into one (or several) honky-tonks for drinks and live country or Southern rock music. You can’t go wrong as all of the artists are immensely talented.  Our favorites are Tootsies, The Stage, and Honky Tonk Central.

For a slightly more low-key night, do not miss Pinewood Social in Rolling Mill Hill. Pinewood Social has it all: food, fancy cocktails, local beer, local coffee, bowling, bocce ball, ping-pong, and a pool. Random? Yes. But somehow, it all fits together seamlessly into the most awesome gathering place for any size group. It feels simultaneously like a house party at your best friend’s house and the greatest Sunday Funday with tons of new friends at an athletic club. It also doesn’t hurt that the menu is filled with upscale comfort food that seasonally changes. What to eat: Burrata & country ham salad and roasted carrot and apple bisque (with fennel popcorn and almonds-genius!) Bowling: $40/hour for up to 6 people, shoes included. Reservations necessary! 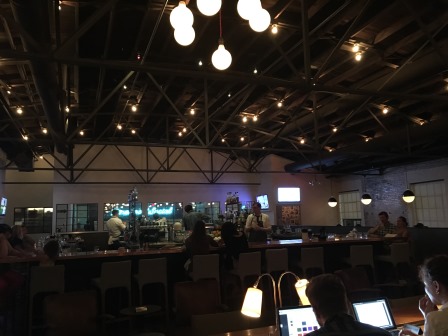 Stay at the Hyatt Place Nashville Downtown to be within easy walking distance of most of the places listed above. The hotel lobby is beautiful, the rooms are spacious (the room included a “cozy area” for sitting/reading) and there is a full breakfast offered. One of my favorite touches was the water bar in the lobby. Three infusions were offered daily (citrus, cucumber, and strawberry). My only complaints about the hotel were that the elevator was quite slow and there was construction across the street which prevented us from sleeping in late.

If you want to hear live music, but are looking away from SoBro, go to The Sutler Saloon, located in an antiques district of Nashville. The historic music venue has been open since 1976 and has seen famous acts like Garth Brooks, Johnny Cash, and Willie Nelson. It was recently revived and re-imagined in 2014 and has already been host to many current acts. The restaurant features Southern cuisine and craft beer. You can also get craft cocktails downstairs in the speakeasy lounge, The Cellar. We checked the live events page and saw there was a Good People Great Writers event going on that Monday. We had such a fun night and enjoyed getting to hear some of the up and coming singer/songwriters in the area. I highly recommend it for a fun Monday night!

As of this trip, my new favorite neighborhood in Nashville is 12 South. This is where I would live if I were a Nashville-ian. 12 South is filled with beautiful homes, hipster coffee shops, local beer vendors, stylish shops, and great local meals.

Visit Reese Witherspoon’s boutique, Draper James, a women’s lifestyle brand with clothing, accessories, and housewares. Everything is bright, cheery, and beautiful, but beware of the price tags! And no, she is probably not going to be at the store (sadly).

My favorite store on the block was White’s Mercantile. Housed in a former gas station, this “general store” is more of a high-end boutique and gift shop with everything from kitchen items to candles to books to sweaters. It is owned by Hank Williams’ granddaughter, Holly Williams. This is the kind of shop where I usually end up leaving with nothing because I want everything.

The Gulch is another neighborhood that I enjoy. It has an industrial history, but has more recently developed into a spot for young people and has many options for dining and nightlife.

We spent Cinco de Mayo in Nashville and based on our friend Sean’s research, chose Saint Anejo to get some Mexican food. Apparently, so did everyone else in Nashville! We managed to successfully do the hover and swoop on some seats at the bar and avoided a 2.5 hour wait for a table. The tacos and guacamole were great, but the highlight was definitely the tequila cocktails. Saint Anejo actually knows how to make a perfect margarita without using any fake sour mix. The restaurant has a great open-air concept and we had a blast celebrating the Mexican victory over the French at the Battle of Puebla. What to order: The Paloma (with tequila, lime, and grapefruit soda)

Also in the Gulch is the Yazoo Brewing Company. The brewery was founded in 2003, but moved to the Gulch in 2010. Their beers have won numerous awards and are now widely available across Nashville and elsewhere. The taproom is open Wednesday through Saturday for small bites and fresh drafts. You can also take a brewery tour and bring home freshly bottled beer.

Hillsboro Village, near Belmont and Vanderbilt Universities, is filled with artsy shops, boutiques, and restaurants. Make sure to fit in breakfast at Pancake Pantry, one of Nashville’s most famous and well-loved breakfast restaurants. Arrive early as there is frequently a line wrapped around the building, especially on weekends. What to order: Try the house special Santa Fe Cornmeal Pancakes (filled with bacon, cheddar cheese, and roasted green chiles served with maple syrup, salsa, and sour cream) 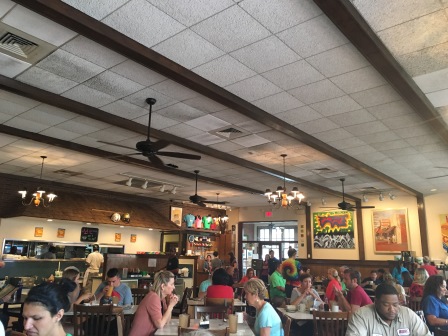 About 30 minutes from Nashville, you’ll find “America’s Favorite Main Street,” located in downtown Franklin, Tennessee. Franklin is located in Williamson County, which is one of wealthiest counties in the country and is also home to several country music stars.

The Old City and Rest Haven cemeteries are the resting place to several Civil War veterans as well as some who fought in the Revolutionary War. Tod Carter, one of the sons who lived at the Carter House and died during the Battle of Franklin is buried at the Rest Haven cemetery. The Rest Haven cemetery is also home to the Tomb of the Unknown Soldier. It is unknown whether he was a Union or Confederate soldier.

Main Street, in downtown Franklin, is a great place to grab a bite to eat, walk around, and shop. You can also take an unofficial walking tour to many of the historic sites located in and near the downtown area.  Stop for some ice cream at Kilwins, pick up some handmade soaps at Bathos, and take home some souvenirs from the Franklin location of White’s Mercantile. You can also see a movie or live music at the historic Franklin Theatre.

Finally, stop at the Factory at Franklin on your way back to Nashville to shop for artisinal goods or antiques and have a quick snack at Franklin Juice Co or Honest Coffee Roasters.

You might even catch a country band doing a live show at one of the venues. While we were there, we heard a band doing a sound check that sounded a lot like Montgomery Gentry (and was!!) It just so happened that Montgomery Gentry, a country band that I love, was doing a charity event to support Layman Lessons. Layman Lessons provides meals, clothing, and blankets to homeless in the area. For a small donation, we were able to see a Montgomery Gentry concert with only about 125 people. As a bonus, Troy Gentry walked out just after the sound check and I was able to chat with him for a few minutes!

Thanks for reading! I can’t wait to tell you all the details about the Kentucky Derby next week. And if you want to get all the info about France, Greece, and Turkey, please subscribe to the blog or follow the Facebook page for updates.