Imagine getting woken up from your nap on a train to four imposing men speaking Croatian and banging on your train compartment door.That happened to us and it was so scary!Not to mention we were woken up so we were confused and totally disoriented.I was really worried that Kyle’s friend Dennis was right about the police/guards trying to jack your stuff on trains, but luckily, they just wanted to stamp our passports and check our tickets when we crossed the Hungarian-Croatia border.What made it even more scary was that when you pull into the train station, all the guards are walking around with huge hammers looking like they are going to bust open your kneecaps!We slept for most of the train ride, but when I was awake, I really got to see a lot of the Hungarian and Croatian countryside.

When we got to Zagreb, which is the capital of Croatia, we got lost looking for our hostel and not one person knew where it was until finally some friendly Croatian police helped us.Apparently Zagreb is not the tourist hotspot which was nice because we really were free to wander the city with just the Zagrebians. We dropped our stuff off and wandered around the city.We saw the main square and some parks.We saw the cathedral which was huge, but partially under construction.Unfortunately, a lot of buildings here seem to be under construction.I don’t know if this is something all across Europe because everything is so old, or if it is just Eastern Europe because I really don’t remember it being like this when I was in Spain or on my first trip to Europe.We saw the Lostrscak Tower and the Stone Gate of the city, which we think is from 720 (or 1720) and was one of the original entrances to the city.We were all so tired from lack of sleep and I felt like I was starting to get sick, so we went to bed at 9pm to get some extra rest so we could be really awake for our trip to Split.

This is the view from the tower

This is a gate to the city…maybe? 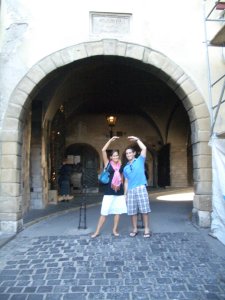 This is one of the original stone gates to the city!