The subject line is the only word we learned in Hungarian (pronounced kursurnurm) which means “thank you”.Hungarian is so hard and so different from English, but luckily people speak enough of English that we could get by without too much trouble!

I think we’ve walked about 15 miles in the past two days and I think we’ve seen pretty much everything in Budapest.Yesterday, we walked through Budapest all day.We ate lunch at a Hungarian café next to the St. Stephen’s Basilica and had traditional goulash soup with bread.It was so yummy…it has beef, dumplings, potatoes, onions, carrots and paprika.While we were there we saw two couples getting married…Europeans have access to getting married in the most beautiful churches ever! 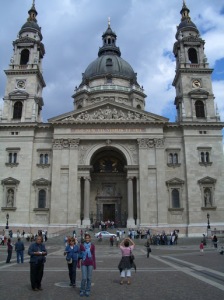 Then we walked down the Danube River to see the Hungarian Parliament and then crossed the Elizabeth Bridge to see the Castle District, which was really amazing.It was another beautiful day and there were some great views of the city from the Castle.Budapest is actually a massive city and spans both sides of the river; one is called Buda (that is the older part) and the other side is called Pest. 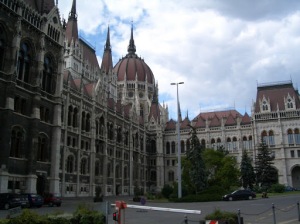 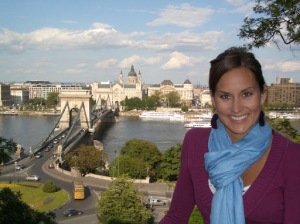 Later that evening we went out to this club called Rio which was so much fun.Meryl and I loved it, but Harris was not such a fan.It is the biggest club I have ever seen and they played all kinds of techno music so everyone was dancing.Harris said later that he felt like he had to play bodyguard for us all night because so many guys were around.I met two guys from Italy named Giuseppe and Norberto, so I talked to them for a little and tried to practice the tiny bit of Italian I have learned and they taught me some.Everyone knows how obsessed I am with Italy, so I was really excited to talk to them, especially since they gave me one of the nicest compliments I have ever had.They said I had great style like the Italians.I was really excited/flattered because obviously the Italians are known for their great style so I was so happy that actual Italians compared me to them!

After we got back, we met up with a girl named Stephanie from the hostel and went to watch the sun rise over the Danube River.We actually missed it though because in Budapest the sun rises really early and doesn’t set until really late, but it was still beautiful.

After Harris woke up Meryl and I for our last day in Budapest, we decided to go see the Baths.On the way, we saw the Synagogue, which is the second largest in the world and the largest in Europe; it was designed to seat 3000 people.It was really, really beautiful.There was also a sculpture in the synagogue that looked like a tree and all the leaves had names of families that died.We also saw the Opera and stopped for lunch and got Doner Kebab.It was so fresh and delicious and I was so excited because I have not had it since Spain.It was definitely the best lunch of the trip: gyro meat with lettuce, tomato, onion and sauce on a wrap.

There was also a park where the baths are with a castle.We decided to go in and they had a fun market outside, but the whole place was swarming with little tikes and we decided we had to get out of there.There were also what appeared to be American Indians playing music so it was all in all quite a weird experience. 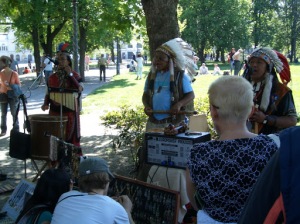 The baths were really interesting.There were about 10 or 15 indoor pools with gross yellow water and the whole thing was really hot.But then we went outside and there were three massive pools surrounded by a beautiful building.They had jets and lap swimming and even a little circle with water that went really fast and pushed you around in a circle.There were so many people there and it was interesting to see how all the European ladies wear bikinis, even really overweight ones.They just are not as shy as Americans are.After the baths, we walked all the way back to the hostel and planned our trip to Croatia and went to bed for two hours since we had to get up at 4:30 to catch our train to Zagreb!! I think the train station is the one they used in one of the Ocean’s movies, so if anyone knows, let me know!