In light of recent events, I want to do a post about my trips to Boston in honor of this wonderful city. Alex and I were fortunate enough to be able to visit beautiful Boston not once, but twice last summer. I had only been to Boston previously to visit colleges and to be honest, I was a little bit bratty and ungrateful and my memories of the trip consist mainly of being annoyed that I was being dragged by my mother to look at more colleges. Add about ten years and a much better attitude, and on last year’s trips, I became smitten with the city. If it wasn’t so cold in the winters, I might even want to live there. Words cannot express how much I adore Boston. It is so vibrant and full of culture and if you are a food-lover like me, it is heaven. I do believe I would visit every year if I had the funds and time to do so.

Last year, Alex and I were able to go to Boston twice for two dear friends’ weddings. One was in Providence (I will do a separate post on our short visit there), but we spent time in Boston before and after the wedding. The second wedding was in Boston, so between the two visits we were able to check many items off of our travel to-do list.

We flew to Boston and arrived at our friends’ house in Cambridge. After greetings and cocktails, we decided to go to Fenway to try to get tickets for the Red Sox game against the Tigers. My friend Hilary, a Boston native, thought there was no way we would get tickets, but her husband was able to get us tickets right after the first inning started! Historically, I am not a huge baseball fan, but after living in St. Louis for four years where it is nearly impossible to not be a Cards fan, I caught a little bit of baseball fever. With that said, we really enjoyed seeing a game at Fenway. It is such a unique stadium and I loved that because it is smaller, you can see the game and feel close to the action from anywhere. If you are a baseball buff, it is a must-see! We did not take the tour of Fenway, but I would be interested to do it in the future purely because of all the history!

Here are some pictures from the game: 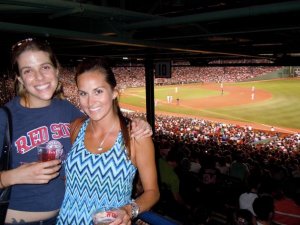 After leaving the game, we headed home to get some rest for a big day of touring Boston before  going to Providence for the wedding. We woke up early in the morning to head out and see some of the city. Since we were staying in Cambridge, we started out walking around there and walked through the beautiful Harvard campus. I have heard great things about the tour, but we opted not to do it. In general, we tend to prefer walking around ourselves when traveling. We use apps and our smartphones to find out facts and history about what we are visiting.

After leaving Harvard, we headed to the North End for some lunch. Based on a recommendation from a friend who blogs over at La Denver Dish, we went to Neptune Oyster. (Check her blog out if you love good food, you will thank me!) Laura’s recommendation did not disappoint. Neptune Oyster was one of the best meals I have ever had, hands down. A year later we are still raving about the Lobster Roll. We also had the clam chowder, which was amazing and fresh, but I honestly wished we had just each ordered a Lobster Roll. They are so great, you will not want to share. I recommend ordering it hot with butter, but I am sure the cold with mayo is delicious as well. Neptune also serves Cisco Brewers beer, which we loved. If you like beer and you are in Boston, make sure you get something local. The city has amazing beers and you would be missing out if you ordered a domestic that you could get anywhere.

After leaving Neptune, we walked around the North End through the North End Park and down to the Harbor. We were fortunate to have a beautiful day and were able to enjoy the sunshine as we walked off the lobster roll.

At that point, of course, we were ready to sample more of Boston’s food scene, so we walked over to Mike’s Pastry for some cannolis. Apparently, there is quite a debate among Bostonians between Mike’s and Modern Pastry. Next time we are in Boston, we will have to sample Modern so we can decide for ourselves. We were both very impressed with Mike’s and enjoyed our cannolis downtown!

After a drink with one of our hosts, Alex and I continued our tour of downtown Boston. We walked up to the Granary Burying Ground. This was one of my favorite visits in Boston. The graveyard includes several notable Revolutionary War-era figures, including Paul Revere, John Hancock, and Samuel Adams.

Granary Burial Ground is one of the stops on the Freedom Trail. We did not have enough time to walk the whole trail on this trip, so we saved it for our second Boston trip. We did stumble upon a few more of the sites on the Freedom Trail during our walk in Boston, but we wanted to wait to do the whole Trail in order on our second trip. Here are a couple of pictures of some of the sites we did see:

At the end of our walk, we decided to stop at the New England Aquarium. As a Florida native, I tend to be skeptical of non-Florida Aquariums because I have seen so much aquatic life at Florida aquariums and zoos. However, I was pleasantly surprised. The New England Aquarium has a lot to offer. I particularly enjoyed watching the sea lions and seals play. The Giant Ocean Tank in the center of the aquarium is nothing short of gorgeous and we spent a lot of time watching the various animals swim around. We also enjoyed the shark and ray tank, where we were able to pet the animals!

We ended the night with dinner at Bricco, which was incredible. I had the Big Night Timpano, which was so rich, yet not overly heavy. We both enjoyed the meal immensely. One of our favorite parts was sitting next to the open windows and people watching the bustling North End. It reminded me of sitting in open air cafes on our European travels.

After our dinner, we picked up our car to head to Providence for the wedding! I will blog next about Providence and our second Boston trip! Have you ever been to Boston? What are your must-dos?

Hi there! I'm Crystal. Please follow my adventures! I will keep you updated on my travels and experiences with new places, people, cuisine, and cultures. Feel free to email me directly at candietravels@gmail.com for partnership opportunities or if you just want to chat!