My blogging has taken a bit of a hit with being busy at work and with family during the holidays, but I am back and excited to share a recap of our New Years ski trip to Breckenridge. Alex and I had planned a trip to go skiing with a few couples we are friends with. Alex and I met the guys in law school and have been friends with them for the last five and a half years! We had such a fun time traveling with the group and the whole trip went seamlessly. We had a few snowboarders, but most of the group skied. For the most part, we all were close in skill level (or had at least one buddy at the same level). We also had a blast when we weren’t on the slopes, spending time at restaurants, bars, and shops in town, and hanging out at the condo. It will definitely go down in the books as one of my favorite vacations! 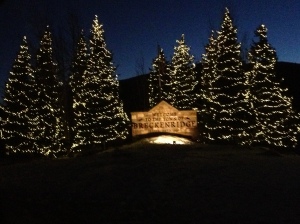 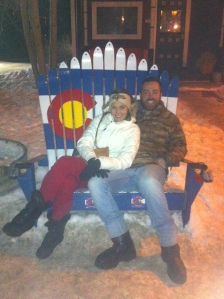 Now, for my recommendations:

On your next trip to Breckenridge, please eat at Angel’s Hollow. The place is a bit hard to find, but definitely worth it. We had gotten a recommendation from one of the staff at the Breckenridge Distillery, based on his review of the killer margaritas and claim that it was his favorite restaurant in town. The chef at Angel’s Hollow is a graduate of CIA, yet the food is very reasonably priced, especially for a resort town. The servings are enormous. Most people had burgers or burritos, but I stuck with the fish tacos that were a bit lighter. We all shared nachos and guacamole. Everything was amazing and the margaritas were strong yet delicious and fresh, my favorite kind! As a bonus, Angel’s Hollow has a very laidback vibe. We were in quite a festive mood and ended up dancing on the tables (and we didn’t get kicked out!) If you want a fun vibe with delicious food and strong drinks, definitely find Angel’s Hollow.

The girls in the group shared wine and got slices of pizza for lunch at Giampietro, a pasta and pizzeria that has been around for generations. Even at lunch, there was quite a wait because the restaurant only has a few tables, but it was well worth it. If you are craving the cheesy goodness of pizza, this is the place. The bruschetta was excellent as well. 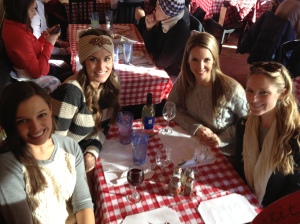 Downstairs at Eric’s apparently has great pizza and burgers, but we stuck to the bar and had local Colorado beers on tap. It would be a great place to go if you are traveling with children because the restaurant features an arcade. I hear Downstairs at Eric’s is a local favorite, so next time we go back, I will have to try the food!

I have mentioned more than a few times on this blog how much I love visiting breweries when I travel (Chicago and Boston recaps), so it should come as no surprise that we visited Breckenridge Brewery. The brewery and pub are located in Breckenridge, so there are several beers on tap that you can’t find in your local liquor store, particularly seasonal beers. Breckenridge Brewery has a full lunch, dinner, and late night menu, but we opted to stick with drinks and all tried several of the beers. The Agave Wheat (available year-round) is one of my favorites. Try it with orange juice as a beer-mosa on the weekends!

The Breckenridge Distillery is located a bit outside of town if you want to do a full tour, but if you want to stay in the town of Breckenridge like we did, you can stop by the tasting room off of main street and try Breckenridge Distillery’s vodka (gluten free), bourbon, and bitters. The staff is super friendly and gave us several great recommendations for dinner and bars while giving us samples of the Distillery’s liquors. The bourbon and vodka are both award-winning, but the bourbon was hands down my favorite!

Gold Pan Saloon is a very laidback bar with a lot of history. It has actually been open since the 1800s in one form or another! The bar has food and drink specials on most weekdays and serves breakfast until 7pm everyday. If you’re looking for a casual atmosphere with a lot of fun people, definitely check out Gold Pan Saloon.

If you’re looking for something a little more high energy, Cecilia’s is the place to be. We had an epic dance party there. The bar itself has three rooms with a bar in each and a huge dance floor in one. When we were there, the DJ was playing a mix of songs that all had organized dance routines (the wobble, stanky leg, cupid shuffle, etc) and everyone around was having an absolute blast dancing their faces off. Definitely a highlight of the trip! I wish I had pictures!

Breckenridge Ski Resort. Obviously the skiing speaks for itself, but having skiied at several resorts both as a child and an adult, I’ll throw in my two cents here. Breckenridge is a great place to ski no matter who you are traveling with or what level you are at. There are many greens and blues for beginner to intermediate, and there are several expert only terrains with black level and up. There are 5 peaks to choose from and they are fairly easy to traverse between, although our snowboarding friends would disagree. The ski school is great (though I did not participate in it on this trip). My only recommendation would be to avoid going at New Years. It was pretty busy the whole time we were there and it would have been nice to have less crowded runs. The town was really wonderful, and being the largest historic town in the area, there is plenty to do. Check out a really cool map of the town and resort here.

Also, we all rented our gear from Avalanche Sports Ski, Snowboard & Bike Rental, which was reasonably priced and conveniently located. The staff was also very helpful in finding you the right gear for your skill level. I definitely recommend them! If you book online, you can save 20% on your rentals.

A company called Ice Castles built an ice castle in Breckenridge that you can visit for $10 per person. The castles are built by hand and made from more than 20,000,000 pounds of ice. You can walk through beautiful glacial formations and caverns, or slide through tunnels. My favorite part was that the entire castle is lit up by various colored lights, making for great photos!

Some shots from inside the Ice Castle: 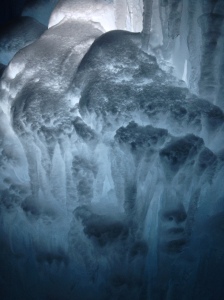 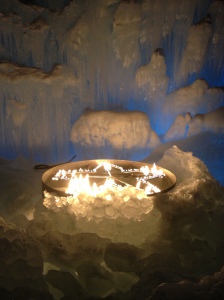 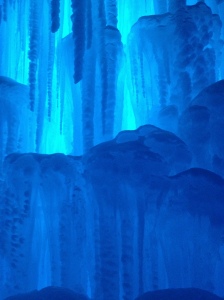 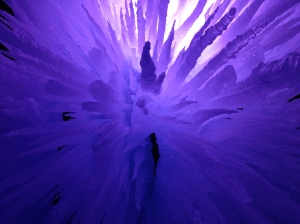 The girls spent a day shopping at the many shops in the town of Breckenridge while the guys in the group hit the slopes an extra day. There are several shops that sell Breckenridge clothing and souvenirs, a few art galleries, and several women’s boutiques. My favorite was Ruby Jane, a boutique that sells unique home decor, clothing, gifts, and jewelry. We also stopped by The Twisted Pine, a fur and leather store, to browse all of the fancy furs, and refueled with delicious fudge at Oh Fudge Sweet Nuts. Yum!

Stay: The whole group shared a ski-in/ski-out condo, Cedars 37, through Summit Mountain Rentals. We skiied right on Peak 9 in Breckenridge. It was absolutely beautiful and I would highly recommend it. It was also easily walkable to everything we wanted to do in town. The condo easily slept 8, the kitchen was stocked for easy cooking, and as a bonus, there is a really awesome moose head in the living room.

We celebrated the start of 2014 at our cabin, so I will leave you with a few shots from New Years Eve before we recap.

Have you ever been to Breckenridge? What are your favorite ski resorts?