When one of my closest friends and her husband moved to Alabama last year, I was naturally sad, but fortunately we were able to put a visit on the books almost immediately. The Gators were scheduled to play the Crimson Tide on Shannon’s birthday weekend so we decided it would be the perfect time to visit one of our favorite couples, celebrate her birthday, meet their new baby girl, see their new home, and cheer on the Gators. Obviously, we had many things to celebrate (minus the Gator loss of course)! Suffice it to say, we had been eagerly awaiting the weekend for a while and were so excited to hit the road last Friday morning. If you follow my facebook or instagram pages, you probably saw some pictures from the fun weekend! After picking up the road trip essentials (see below), we headed out for the drive to Tuscaloosa.

After arriving, meeting Shannon and DC’s precious baby girl, and catching up over the local Rammer Jammer beer, we drove to downtown Tuscaloosa to check out Black Warrior Brewing Company, a local brewery and taproom. I think the group consensus was that the Strawberry Blonde was the best beer, but I had an Apple Pie beer that I also loved! It had just a hint of apple and a bit of spice. It would be a great light beer for the fall. The Black Warrior Brewing Company staff was friendly and the taproom was packed at 3:30 pm! If you check out Black Warrior, note that they allow you to bring your own food in to enjoy with their beers. I love that! 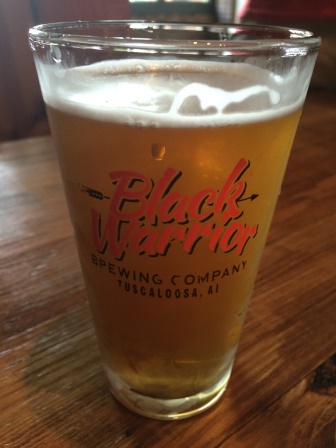 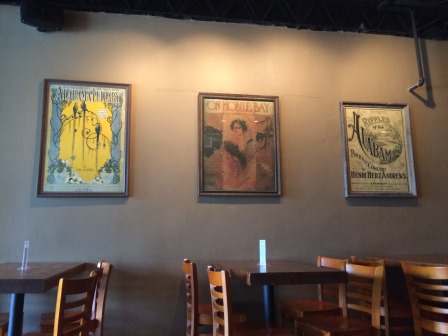 Next, we stopped at Druid City Brewing, Tuscaloosa’s first craft brewery. Druid City has an atmosphere that is a bit more eclectic than Black Warrior and it boasts an impressive record collection as well as having cornhole and other games on the outside patio. We loved it!

After our brewery tour, we went back to Shannon and DC’s house to wait for the rest of our group to arrive (another of our favorite couples, Taylor and Eddie, was also driving in to stay for the weekend). We poured some birthday bubbly to celebrate Shannon and then headed out with the group to a neighborhood driveway happy hour. For the record, I LOVE that their neighborhood has a driveway happy hour and I’m adding that to the list of things we must find in our next house! We had a blast catching up with our whole group and meeting some of Shannon and DC’s new friends in Alabama. 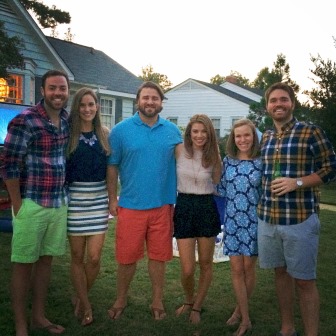 After happy hour, we drove back downtown for dinner at Jim ‘N Nick’s BBQ. Jim ‘N Nick’s was founded in Birmingham and has expanded to 33 locations across the South. Not only was the food delicious, but the management is all about community and bringing people together. This is exemplified in their family dinners, which I highly recommend. We all ordered a la carte, but saw other tables getting the family dinners and they looked amazing. If you are ever near a Jim ‘N Nick’s  (see full list of locations here), go. And make sure you order the cheddar biscuits. They are addicting!

Saturday was gameday, so we all went to The Quad to tailgate at one of Shannon and DC’s friend’s tailgate. We had a great time and were impressed with the hospitality from Alabama fans (although to be fair, it is a little easier to be hospitable when you know your team is going to win!). 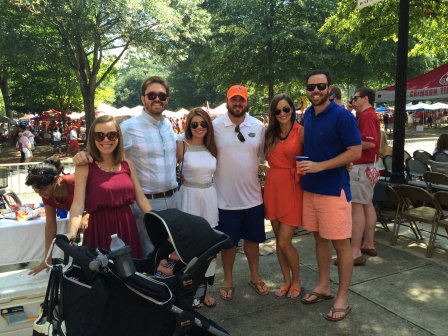 After walking around the Quad, we headed over to a famous local establishment named Gallette’s to get the famous Yellow Hammer drink. A Yellow Hammer is made up of a supposedly secret combination of vodka, rum, pineapple juice, and orange juice. It was very refreshing on such a hot day! However, Gallette’s was packed with football fans so being inside with hundreds of people kind of negated the refreshing feeling. The energy was unbelievable though, and I’m glad we got to experience this Tuscaloosa institution!

Before we knew it, it was time to head into Bryant-Denny Stadium to cheer on the Gators. Alex and I had come to Tuscaloosa four years ago to watch the Gators, but we just tailgated and watched the game at a bar that year. We were excited to finally watch a game inside the stadium this time!

Unfortunately, the Gators lost the game, but we still had a fantastic weekend with our friends! After the game, we ordered sushi and hibachi from Ichiban Japanese Grill and watched the FSU-Clemson game. Ichiban had great food at college prices which is something I always appreciate! It is a hole in the wall, but don’t let that deter you!

For breakfast, we visited another Tuscaloosa favorite, The Waysider. Filled with memorabilia from Alabama sports and photos of great moments in sporting history, I would advise you NOT to wear another team’s gear unless you want to get called out in front of the entire restaurant. We witnessed some Gator fans being chanted at with yells of “Roll Tide.” Fortunately, we enjoyed a peaceful breakfast and kept our Gator love under the radar.

After breakfast, we drove around Tuscaloosa a bit more past The Bama Theatre and Old Bryce Hospital, and stopped for a walk at the Park at Manderson Landing. The weather was perfect and the walk was beautiful. We hope to come back for a non-football weekend and explore the town a little bit more with our friends!

We had one last stop to make before heading home. We had heard rave reviews about the famous Dreamland BBQ and decided that even though we were stuffed from breakfast, we should pick up a snack for the road. Dreamland started with its hickory smoked pork spare ribs in 1958 and is best known for them, so we ordered a half slab of the ribs to share on our ride home. Served with white bread and their famous bbq sauce, they were perfectly cooked and very flavorful. The atmosphere inside is cozy and homey. If you aren’t heading to the Alabama area anytime soon, you can also order most of their food online. 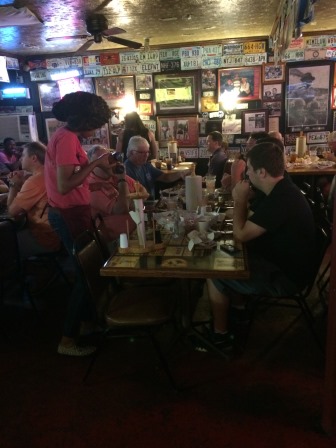 Gameday weekend in Tuscaloosa was a success! We had a wonderful time with all of our friends and we will definitely be returning to visit our Tuscaloosa friends, so I look forward to sharing more recommendations with you in the future!